Be amazed by the 3rd coin of the World Buddha Heritage series, featuring Wat Pho, The Temple of the Reclining Buddha of Thailand. Located in Bangkok, Wat Pho, one of the largest and oldest Buddhist temples, is famous for its huge reclining Buddha statue which has his feet inlaid with mother of pearl. This is probably the most interesting temple in Thailand as it combines both history and medical science, as well as being a centre for meditation and traditional massage training.

Being the oldest temple in Bangkok, Wat Pho was constructed nearly 200 years before Bangkok became the capital of Thailand. It was also a centre of education for traditional Thai medicine, and statues were created showing yoga positions. In 1962, a school for traditional medicine and massage was established. The temple was famous as one of the oldest universities of Thailand. Their traditional method of Thai massage goes back a long time whereby the rich, powerful and famous people go for a taste of traditional massage.

The gold-plated reclining Buddha statue is 46 meters long and 15 meters high. The Buddha statue’s eyes and feet are decorated with engraved mother of pearl, with the soles of the feet displaying the 108 auspicious characteristics of the true Buddha. In 2008, the historic marble inscriptions in Wat Pho was registered with UNESCO’s Memory of the World (MOW) as MOW documentary heritage for Asia and Pacific Region.

Buddha rays are often associated with the glowing of the Buddha and people who manage to see this extraordinary phenomenon consider it to be a miracle. The Singapore Mint is proud to incorporate the special ray effects created with precision minting technique onto the coin design with our latest minting technology. The rays behind the reclining Buddha on the coin depicts a seemingly ‘glowing Buddha’ and this is a further testament to The Singapore Mint’s continual advancements in coin minting technology.
The reverse of the coin features the Dhug or The Protection Parasol, which is a traditional symbol of both protection and royalty. It symbolizes the authority of the Buddha’s teachings and the wholesome activity of preserving beings from illness, harmful forces, obstacles and so forth in this life. One important function of a parasol or umbrella is to cast a shadow, the shadow of protection, just as the Parasol offers protection from the sun, the Buddha also protects people’s spirits from evil. 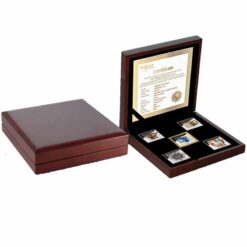