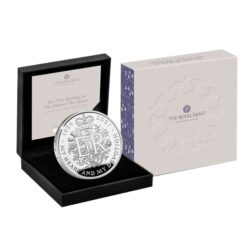 The 95th Anniversary Commemorative Coin from the Royal Mint marks the first time in British history that a 95th anniversary medal was issued, designed with an emblem, which was designed by British artist Timothy Noad, which features the iconic Royal Cypher, the flower of the United Kingdom, along with the words “MY HEART AND MY DEVOTION” christmas greetings that Queen Elizabeth first broadcast in 1957. Jodie Clarke’s work, first released in September 2015, is the longest reigning Queen Elizabeth in British history.

Be the first to review “UK Coin, 2021 The 95th Birthday of Her Majesty the Queen 2021 Silver Proof Piedfort Coin” Cancel reply