A set of special stamps on the theme of “Characters in Jin Yong’s Novels”, with associated philatelic products.

Mr Louis Cha began weaving his martial arts world under the pseudonym “Jin Yong” in 1955 and his martial arts novels were serialised in several local newspapers. By 1972, he had written 15 immensely popular novels that are still devoured today by readers around the world. In his well-constructed martial arts fiction, Jin Yong fuses Chinese history with the legendary jianghu, the underworld of martial arts masters, and creates a myriad of unique and distinctive characters. His works have provided infinite inspirations for movies, television series and comics. A number of unforgettable characters in Jin Yong’s world of martial arts come to life in this set of six stamps and a stamp sheetlet issued by Hongkong Post.

$2 – Guo Jing and Huang Rong from The Eagle-shooting Heroes
The $2 stamp portrays Guo Jing and Huang Rong from The Eagle-shooting Heroes. Guo Jing is seen aiming his bow, while Huang Rong is holding the Dog-beating Staff of the Beggars Guild. Guo Jing is a loyal, honest and upright man who grows up on Mongolian grasslands and learns kung fu from the ‘Seven Freaks of Jiangnan’. The adult Guo Jing travels back to the Central Plain to avenge his father’s death. On his way, Guo Jing meets Huang Rong, the smart and clever daughter of the Eastern Heretic Huang Yaoshi, and it is love at first sight. The pair then explore the domain of the jianghu together. Under the guidance of several martial arts masters and his mentor Northern Beggar Hong Qigong, who teaches him the invincible “Eighteen Dragon-subduing Palms”, Guo Jing practises hard and eventually turns into a martial arts ace. Having gone through many trials and tribulations, Guo Jing and Huang Rong finally tie the knot, and together they defend the city of Xiangyang against the invading Mongolians, embodying the chivalrous spirit of “devoting oneself to the country and the people”.

$2.60 – Chen Jialuo from The Book and the Sword
Featured on this $2.60 stamp is Chen Jialuo, the protagonist of Jin Yong’s first martial arts novel, The Book and the Sword. Well-versed in both literature and martial arts, this handsome fellow turns out to be the younger brother of Emperor Qianlong. After leaving home at a very young age to escape from danger, Chen learns superb martial arts from his mentor Yuan Shixiao, dubbed the Eccentric Hero of the Heavenly Pool, and later becomes the chief of the Red Flower Society, a secret organisation aiming to overthrow the Qing Empire and restore the Ming Empire.

$10 – Qiao Feng, Xu Zhu and Duan Yu from The Demi-Gods and Semi-Devils
The $10 stamp sheetlet displays the three sworn brothers from The Demi-Gods and Semi-Devils. The kind-hearted and honest man on the left is the second brother Xu Zhu, while standing in the centre is the chivalrous eldest brother Qiao Feng, and on the right is the wise and benevolent youngest brother Duan Yu. Growing up in the Han community, Qiao Feng later discovers that he is originally from the Khitan region, so he changes his name to Xiao Feng as Xiao is his original family name. He eventually sacrifices himself to end a war, and is considered the most heroic figure in Jin Yong’s martial arts world. Xu Zhu is originally a Shaolin monk and has to later renounce his religious life. He eventually takes over the Lingjiu Palace and marries the princess of Western Xia. Duan Yu, the prince of Dali Kingdom, leaves the palace and is taken to Jiangnan by accident, where he learns powerful martial arts. After many twists and turns, Duan Yu finally returns to Dali.

Mr LEE Chi-ching, a renowned comic artist, was invited to draw the characters from Jin Yong’s martial arts novels using traditional Chinese painting techniques, and stamp designer Mr Gideon LAI then turned these beautiful illustrations into stamps. Moreover, a pale gold backdrop is used to add an exquisite and elegant touch to the stamps. Jin Yong’s oeuvre transcends geographical and temporal boundaries, and has captured the hearts of Chinese readers the world over for generations. This set of special stamps embodies the essence of Jin Yong’s novels, enabling us to immerse ourselves in his fascinating martial arts world. 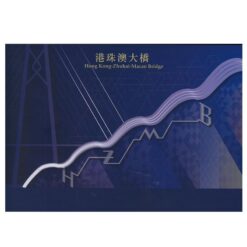 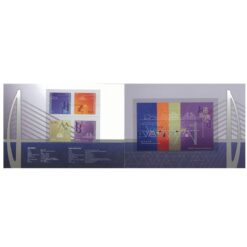 ฿390.00
Add to cart
Login with Facebook Login with Google