Pottery holds a special place in the ancient Greek decorative and applied art. It is characterized by the diversity of clay vessels and the harmony of the graphic and vivid elements.

In the ancient world, Attica was one of the most important centers of Greek pottery. Starting from the 6th century BC, the craftsmen in Athens were busy perfecting the ancient Corinthian methods of producing pottery, creating unique pieces of Attic ceramics. The yellowish tones of Corinthian ceramics were gradually replaced by red colors, making the blackish images more daring and expressive.
Nowadays, thousands of copies of Greek decorated vessels are kept in the world museums and private collections. A 6th century BC scythe, which is unique by illustration, is one of the examples of Ancient Greek pottery. The process of making ceramics is trimmed around the vessel. The Greek pot is preserved in one of the Harvard’s Art Museums (Massachusetts, USA).

Be the first to review “Almenia Coin, 2018 Pottery of the World” Cancel reply 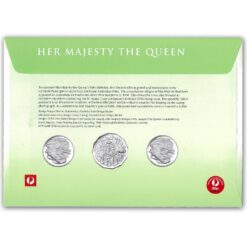